The Oscar For Best Negotiation 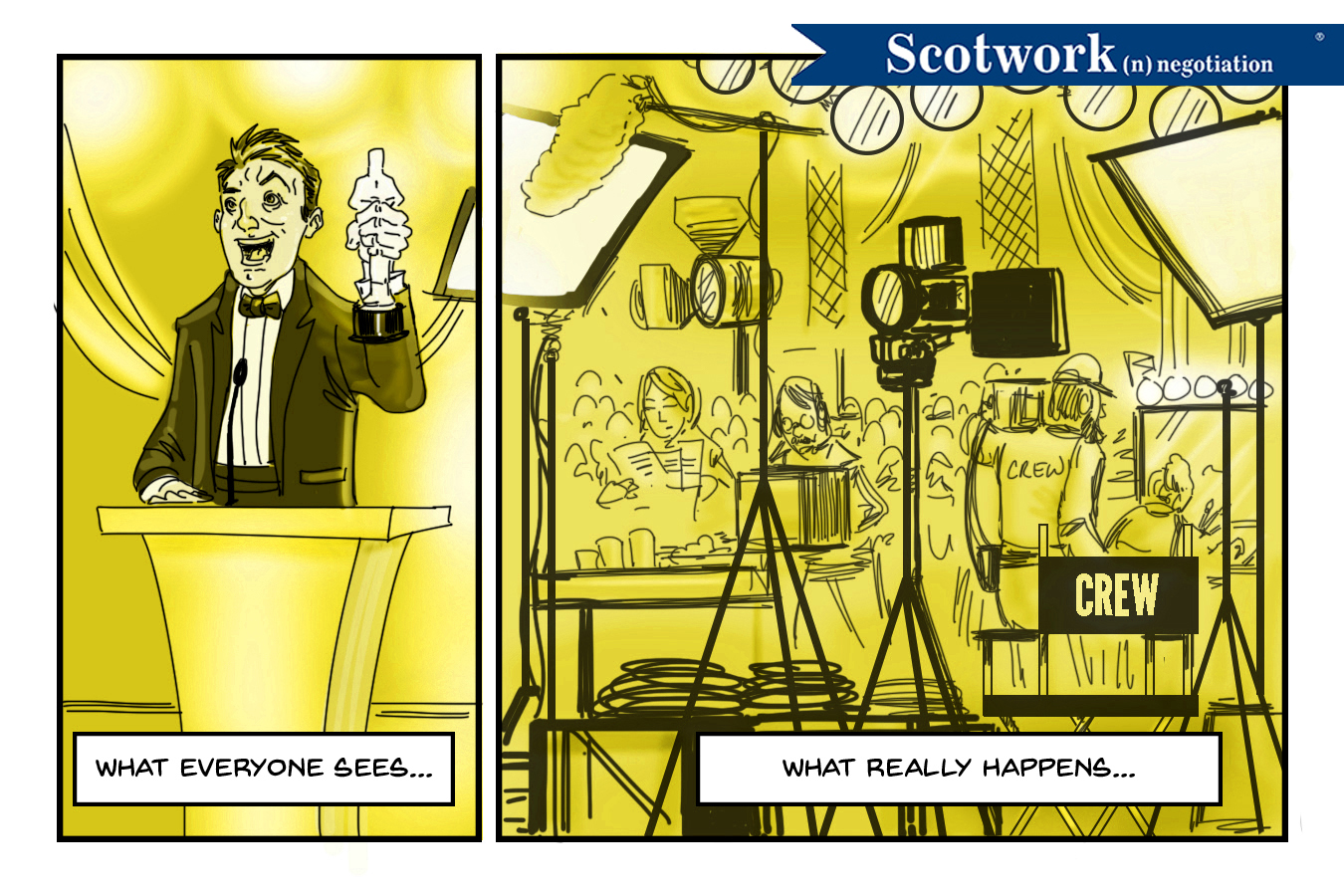 I’m not sure how it started but at the end of every movie my family stays to watch the credits. Did you know that big Hollywood blockbusters will have between 2,000 - 3,000 people working on the film? But yet, when we think of those films we tend to only focus on the lead actors or maybe a scene stealing supporting actor. There’s no way a movie is a success without the team of people that helped put it together. That’s the same for most endeavors, particularly in business. Rarely is success a solo endeavor. However, I’m amazed at how many people don’t take this team approach to their negotiations. Who would you have on your negotiation team?

Early in my career I was a sales rep for a wireless company (that was when wireless meant pagers; if you don’t know what a pager is, read this). After cultivating a lead for along while, I got invited to meet with them as they were looking to outfit their entire team with our gizmos. My boss had offered to tag along for support and I told him, “I got this”. Then one of my colleagues wanted to come along because this potential customer had an office in his territory and wanted to see if there was business there too. I told him, “I’ll let you know.” And off I went, by myself.

When I got to the meeting I was invited into a large conference room. I awkwardly sat by myself waiting for my contact. He kept me waiting for at least 20 minutes, at which point the doors open and the room filled with people. I actually thought they put me in the wrong room till my contact walked into the room. At this point, I should have recognized that I was in over my head and should have found a way to reschedule so I could bring reinforcements. But my hubris kept telling me, “You got this!”

The meeting went from a sales pitch to a negotiation pretty quickly. They had already done their homework and they were ready to work out a deal with me. That’s when things went sideways. Everyone had questions. Everyone had demands. The IT team, the leadership team, the security team, and a bunch of other people just started peppering me with questions. I answered the first few questions just fine but feeling the pressure to have to have an answer for everything, I started answering things I had no answers for! Then I started contradicting myself. I was in trouble.

When I got back to the office, I had to tell my boss I lost the sale. My boss tried to salvage it but it was too late. My ego got the best of me. I thought I could handle it. After all, I was the one that generated the lead. I was the main point of contact. It was my sale. I thought I could handle it. Obviously I didn’t and the painful lesson learned was that if I had others helping me, the outcome could have been different. I would have better served the client if I had a team. I would have been better in a team.

Today, I rarely negotiate alone - I bring my crew. There are certain tasks that need to get done during a negotiation but I specifically bring people that compliment my strengths and mitigate my weaknesses. Here are some of the types of people that you may want to consider bringing with you:

If you are a big picture person... bring someone who is detailed oriented. While you focus on big picture, they can help you with the details.

If you are analytical… bring someone who is a bit more creative. While you try to figure out the logic of solutions, your creative can explore the possibilities of those solutions.

If you are an extrovert… bring an introvert. While you fill the room with your personality, your introvert will be keenly listening and observing the room.

If you are passive… bring someone more assertive. While you find ways to accommodate requests, your assertive partner can help push the conversation forward.

The point is, keep your ego in check and bring a team that can help you out. After all, which would you rather have... losing by yourself or winning as a team?

Brian Buck
More by Brian Buck:
Price Increase??
Be Nice . . . Until It’s Time to Not Be Nice
Back to Insights