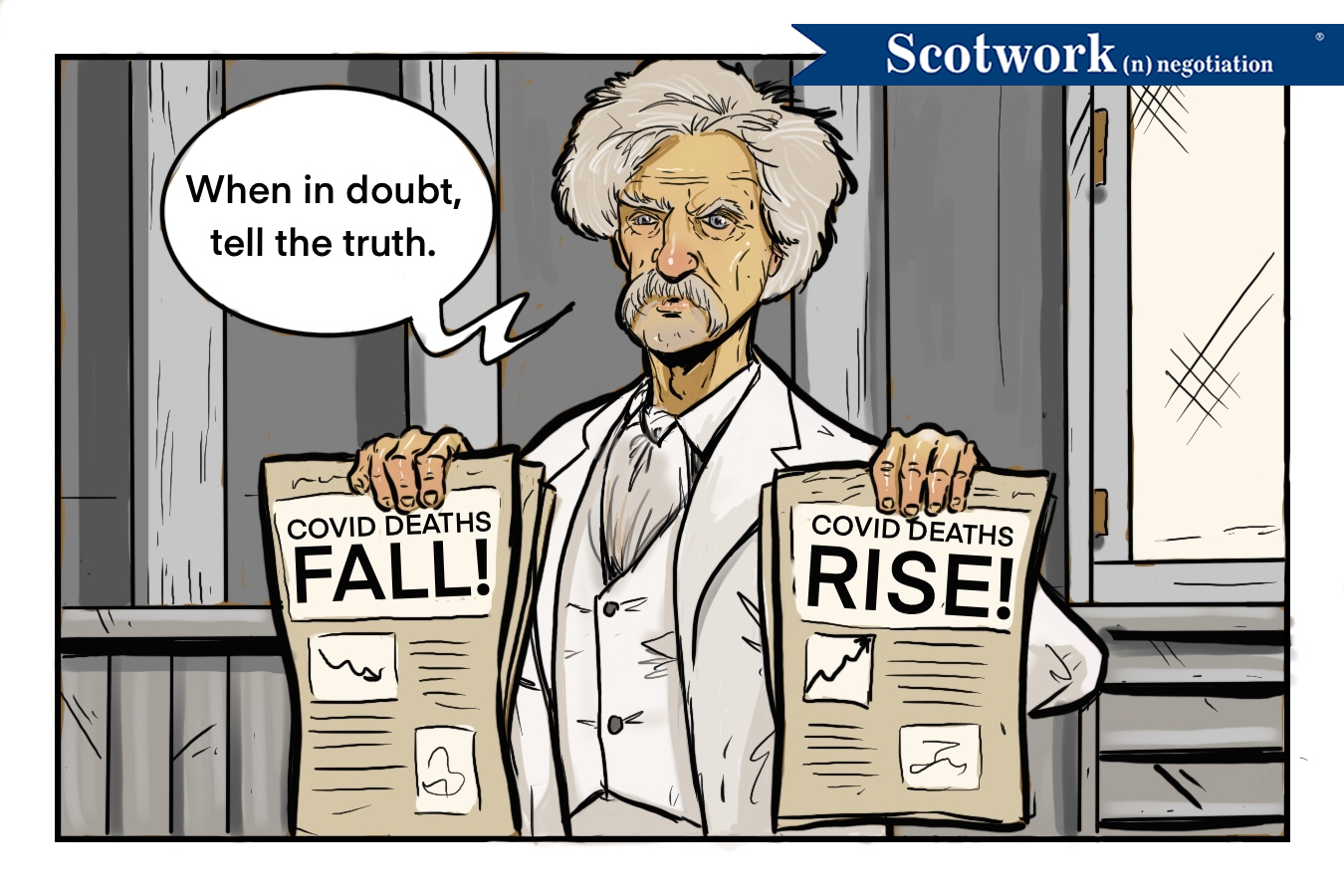 As Mark Twain put it, “There are three kinds of lies: lies, damned lies, and statistics.” Every day we’re bombarded with COVID-19 statistics and oftentimes contradictory statistics. For example, I recently read two different headlines at two different reputable media outlets: “COVID Daily Death Toll Rises” and “COVID Daily Death Toll Declines.” Both were posted on the same day! The confounding part is that both were accurate statements. And this is not an isolated incident. Every day I see commercial deals being negotiated with conflicting statistics seemingly based on the same data sets, and it leads to infuriating debates and time-wasting circular arguments. Knowing how to deal with statistics — or, as Mark Twain put it, those “damned lies” — is a necessity for skilled negotiators.

We use statistics and analytics to inform our positions, perspectives, and opinions. In addition, we often use them to influence the other party at the negotiating table. The pitfall is that negotiators tend to perceive their own statistics and analytics as unequivocal facts that everyone should perceive the same way. However, our interpretation of data is merely that — an interpretation. It’s why both of the headlines mentioned above are actually true. At both outlets, the authors took the same data points and interpreted them very differently for the purposes of supporting their narrative. One took a narrow view of the data while the other took a broader view. Same data, different analyses.

Herein lies one of the challenges of using statistics — they’re opinion-based. Some of you are like me in that you’re data-driven and I’m sure saying that stats are opinion-based makes you cringe. But even though there are sound statistical and mathematical principles that should be applied to any analysis, how they’re applied and what data points are used are left to the analyst’s interpretation.

As in the example above, there was a choice made regarding the time period that each analyst used — each presumably choosing a duration that supported their respective point of view. This happens all the time when data is presented in a negotiation: Everything from stating sales trends, financial perspectives, and market conditions, to a variety of performance analyses can be manipulated to present a certain point of view. In essence, they can all be used to influence opinions.

In a negotiation, it’s difficult to argue opinions. Once we’re convinced of our points of view, we tend to dig in and hold those views to be fact and/or truth. While it’s possible to change opinion, it usually leads to arguments that waste time and can create a more competitive negotiation environment.

Skilled negotiators are deft at minimizing or avoiding wasteful arguments. They do this by seeking to understand versus seeking to be right. When sharing our analysis of any data, it’s very easy for negotiators to get trapped in the endless spiral of trying to demonstrate that their data is better than the other party’s data, or showing how their analysis proves the point that they’re trying to make. It’s perfectly fine to share data or an analysis with the other party; it’s also fine to try to persuade the other party by using the analysis. But as soon as the other party takes exception to what’s being presented, it’s important to understand why they take exception rather than trying to prove how wrong they are. It’s that depth of understanding that will help the skilled negotiator through the difference.

Seeking to understand also extends to receiving data that you don’t agree with. When that happens, seek to explore the data’s genesis and derivation. Asking questions about the analysis itself will help you to better understand the other party’s perspective and how they’re viewing the situation at hand. The more that you can see the situation from their perspective, the better your position in order to effectively navigate the negotiation.

I can only imagine the kind of negotiator Mark Twain might’ve been. My assumption is that he would’ve been a pragmatic one who was skeptical of all data or arguments presented to him. Not a bad approach for any negotiator. After all, as Twain also noted, “There is nothing in the world like persuasive speech to fuddle the mental apparatus.”